71. A jar is filled with two non-mixing liquids 1 and 2 having densities p1 and p2. respectively. A solid ball, made of a material of density p3 is dropped in the jar. It comes to equilibrium in the position shown in the figure: 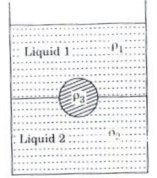 As the ball gets completely immersed in

Also weight of the ball = Net up thrust 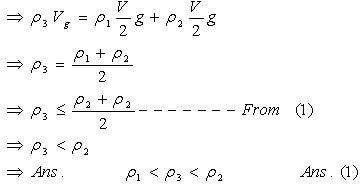 72. A working transistor with its three legs marked P, Q and R is tested using a mulimetor. No conduction is found between P and Q. By connecting the common (negative) terminal of the multimeter to R and the other (positive) terminal to P or Q. some resistance is seen on the multimeter. Which of the following is true for the transistor ?

73. A student measures the focal length of a conver lens by putting an object pin at a distance ‘u’ from the lens and measuring the distance ‘v’ of the image pin. The graph between ‘u’ and ‘v’ plotted by the student should look like
(1) 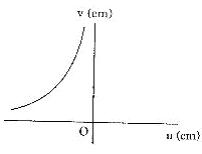 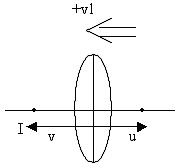 Ans. (4)
74. Directions : Questions No. 74 and 75 are based on the following paragraph. Consider a block of conducting material of resistively ‘p’ shown in the figure. Current ‘I’ enters at ‘A’ and leaves from ‘D’. We apply superposition principle to find voltage  developed between ‘B’ and ‘C’. The calculation is done in the following steps:

(i)         Take current ‘I’ entering from ‘A’ and assume it to spread over a hemispherical surface in the block. 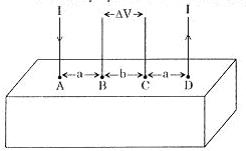 measured between B and  C is 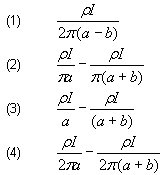 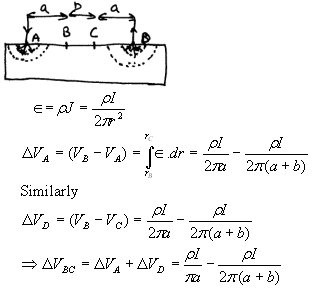 75. Directions : Questions No. 74 and 75 are based on the following paragraph. Consider a block of conducting material of resistively ‘p’ shown in the figure. Current ‘I’ enters at ‘A’ and leaves from ‘D’. We apply superposition principle to find voltage  developed between ‘B’ and ‘C’. The calculation is done in the following steps:

(i)         Take current ‘I’ entering from ‘A’ and assume it to spread over a hemispherical surface in the block.

For current entering at A, the electric field at a distance ‘r’ from A is

76. In the circuit below, A and B represent two inputs and C represents the out put.

77. A body is at rest at x = 0. At t = 0, it starts moving in the positive x-direction with a another body passes through x = 0 moving in the positive x-direction with a constant speed. The position of the first body is given by x1 (t) after time ‘t’ and that of the second body by x2 (t) after the same time interval. Which of the following graphs correctly describe (x1 – x2) as a function of time ‘t’
(1) 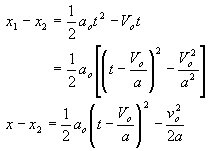 Hence => Ans. (3)
78. This question contains Statement-1 and Statement-2, Of the four choices given after the statements, choose the one that best desctibes the two statements.

79. This question contains Statement-1 and Statement-2. Of the four choices given after the statements, choose the one that best describes the two  statements.

For a mass M kept at the centre of a cube of side ‘a’ , the flux of gravitational field passing through its sides is 4

, its flux through a closed surface

depends only on the strength of the source enclosed by the surface and not on the size or shape of the surface.

Ans. As in electrostatics,

Statement-1 is ‘true’.As gauss law can be prone using coulomb’s law, hence Statement-2 is the correct explanation of statement-1. => Ans. (3)
80. A 5 V battery with internal resistance 2

and a 2 V battery with internal resistance 1

are connected to a 10

resistor as shown in the figure:

The current in the 10

(1)     a screw gauge provided on the microscope

(2)     a vernier scale provided on the microscope

(4)     a meter scale provided on the microscope

84. Consider a uniform square plate of side ‘a’ and mass ‘m’. The moment of inertia of this plate about an axis perpendicular to its plane and passing through one of its corners is

But significant figures allows only two digits after decimal point

86. The dimension of magnetic field in M, L, T and C (Coulomb) is given as

while the other one has dielectric constant k2 = 6 and thickness

Copacitance of the capacitor is now 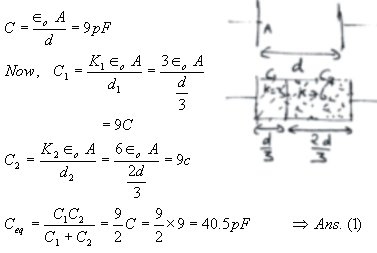 88. An athlete in the Olympic games covers a distance of 100 m in 10 s. His kinetic energy can be estimated to be in the range

89. Relative permittivity and permeability of a material are and , respectively. Which of the following values of these quantities are allowed for diamagnetic material?

90. A thin spherical shell of radius R has charge Q spread uniformly over its surface. Which of the following graphs most closely represents the electric field E® produced by the shell in the range

, where r is the distance from the centre of the shell ?
(1)

91. A spherical solid ball of volume V is made of a material of density

It is falling through a liquid of density

Assume that the liquid applies a viscous force on the ball that is proportional to the square of its speed v, i.e., Fviscous = -kv2 (k > 0). The terminal speed of the ball is

=> Ans. (3)
93. While measuring the speed of sound by performing a resonance column experiment, a student gets the first resonance condition at a column length of 18 cm during winter. Repeating the same  experiment during summer, the measures the column length to be x cm for the second resonance. Then

If the wavelength and the time period of the wave are 0.08 m and 2.0 s, respectively, then

in appropriate units are

95. A block of mass 0.05 kg is moving with a speed of 2.00 ms-1 on a smooth surface. It strikes another mass of 1.00 kg and then they move together as a single body. The energy loss during the collision is

96. Suppose an electron is attracted towards the origin by a force

where ‘k’ is a constant and ‘r’ is the distance of the electron from the origin. By applying Bohr model to this system, the radius of the nth orbital of the electron is found to be ‘rn’ and the kinetic energy of the electron to be ‘Tn’ Then which of the following is true ? 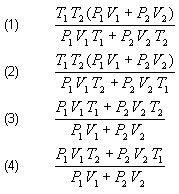 Ans. From Conservation of energy-

99. Two coaxial solenoids are made by winding thin insulated wire over a pipe of cross-sectional area A = 10 cm2 and length =20 cm. If one of the solenoids has 300 turns and the other 400 turns, their mutual inductance is

100. A capillary tube (A) is dipped in water. Another identical tune (B) is dipped in a soap-water solution. Which of the following shows the relative nature of the liquid columns in the two tubes ?
(1)

is smaller than for

102. If a strong diffraction peak is observed when electrons are incident at an angle ‘i’ from the normal to the crystal planes with distance ‘d’ between them (see figure), de Broglie wavelength

103. In an experiment electrons are made to pass through a narrow slit of width ‘d’ comparable to their de Broglie wavelength. They are detected on a screen at a distance ‘D’ from the slit (see figure)

middle of the slit) ?

., where n can be zero or any positive number. If the position xCM of the centre of mass of the rod is plotted against ‘n’, which of the following graphs best approximates the dependence of xCM on n ?
(1) 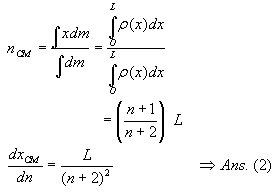