Introduction
Complex number is one of the most important chapter for IIT - JEE. It is assumed to be one of the toughest chapter of syllabus, though it is not. We have discussed this chapter in as simple as we can . The tricks that are used here are uery simple & very useful , espedially the trignometric concepts & theory of equation dicussed here with co-ordinate geometry is quite useful. After going through a very new concept you will find it very interesting & challenging. We have tried our best possible way to make this chapter look easier & interesting . So get csharged up to get into a new world of complwx Numbers.

is called i (unit of imaginavies, pronounced as iota).
A symbol of form a + ib were a, b E R is called a complex number. A complex number is not a number but it is representation of a point in an argand plance , denoted by ordered pair Z = (a, b) wher a is real part (Re (z)) & b is imaginary part (Img (z)).
Argand planc or gausian planc is a two dimcnsional cartesian coordinate system in which x- axis is real axis and y axis imatinary axis . Imaginary axis. 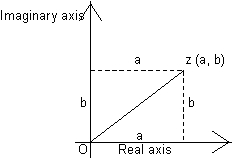 Ans:- 80 Km/hr because , complet number is a hypotuetical concept. Imaginary part to not exist real life.

Vector detinition of comples number.
A complex number z can be represented by position vector

and direction of vector which is usentialy the in clination of vector with positire x - axis is replaced by amplitude of z.
One finds a one - to -one comes pondance between set of position vector and set ofd complex numbers.

Dumb Question:- Can we use results of vector like distance between two positional vectors

provided at least one of c& d is non- zero

(multiplying and dividing by c - id) 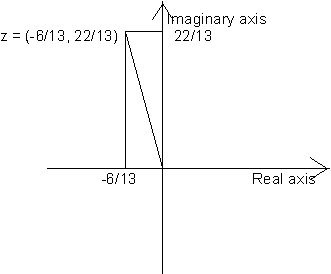 .
arg (0,0)is not defined. Also argument of complex no is not unique, if

is the value so also is

) is called polar from. 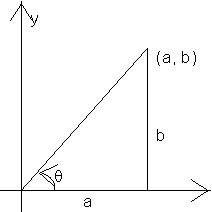 PRINCIPAL VALUE OF ARGUMENT OF COMPLEX NUMBER
The value

of argument which satisfies the incquality

is called principal value of argument.
Let us do the quadrant wise study.

is an acute angle & positive too. 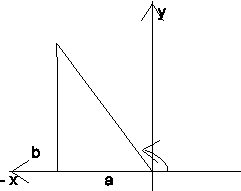