E-4 if y+b=m,(x+a) and y+b=m(x+a) are two tangents to the parabola y24ax, then show that m1m2=-1
which lies on the directrix x+a=0. hence th etwo tangents intersect on directrix which we know is the locus of perpendicular tangents .
hence m1.m2=-1
E-5 show that the parametric representation (2+t2,2t+1)
represents a parabola with vertex at (2,1).

Equation of tangent to the above parabola can be written as-

hence equation of the required lines are, 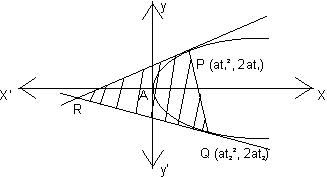 results in the locus of p being a part of parabola, find the value of

Expanding with respect to first row-

E-9: Find the length of the normal chord to the parabola y2=4x which substends a right angle
at the vertex Ans:- a=1 for parabola PQ being normal chord.

E - 10. An equilateral triangle SAB is inscribed in the parabola y2 = 4ax Having its focus at ’S’.
It chord AB lies towards the left of S. Then find the side length of this triangle.
Ans: 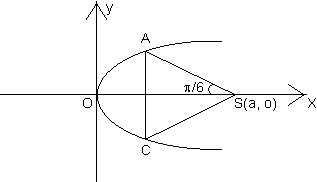 the equation of the parabola becomes -

then we havefrom the equations of tranformation in(1)

The equation of directrix is,