Superconductivity is a phenomenon occurring in certain materials at extremely low temperatures, characterized by exactly zero electrical resistance and the exclusion of the interior magnetic field (the Meissner effect).

The electrical resistivity of a metallic conductor decreases gradually as the temperature is lowered. However, in ordinary conductors such as copper and silver, impurities and other defects impose a lower limit. Even near absolute zero a real sample of copper shows a non-zero resistance. The resistance of a superconductor, on the other hand, drops abruptly to zero when the material is cooled below its "critical temperature". An electric current flowing in a loop of superconducting wire can persist indefinitely with no power source. Like ferromagnetism and atomic spectral lines, superconductivity is a quantum mechanical phenomenon. It cannot be understood simply as the idealization of "perfect conductivity" in classical physics.

Most of the physical properties of superconductors vary from material to material, such as the heat capacity and the critical temperature at which superconductivity is destroyed. On the other hand, there is a class of properties that are independent of the underlying material. For instance, all superconductors have exactly zero resistivity to low applied currents when there is no magnetic field present. The existence of these "universal" properties implies that superconductivity is a thermodynamic phase, and thus possess certain distinguishing properties which are largely independent of microscopic details.

. If the voltage is zero, this means that the resistance is zero and that the sample is in the superconducting state.

Superconductors are also able to maintain a current with no applied voltage whatsoever, a property exploited in superconducting electromagnets such as those found in MRI machines. Experiments have demonstrated that currents in superconducting coils can persist for years without any measurable degradation. Experimental evidence points to a current lifetime of at least 100,000 years, and theoretical estimates for the lifetime of a persistent current exceed the estimated lifetime of the universe.

In a normal conductor, an electrical current may be visualized as a fluid of electrons moving across a heavy ionic lattice. The electrons are constantly colliding with the ions in the lattice, and during each collision some of the energy carried by the current is absorbed by the lattice and converted into heat, which is essentially the vibrational kinetic energy of the lattice ions. As a result, the energy carried by the current is constantly being dissipated. This is the phenomenon of electrical resistance.

The situation is different in a superconductor. In a conventional superconductor, the electronic fluid cannot be resolved into individual electrons. Instead, it consists of bound pairs of electrons known as Cooper pairs. This pairing is caused by an attractive force between electrons from the exchange of phonons. Due to quantum mechanics, the energy spectrum of this Cooper pair fluid possesses an energy gap, meaning there is a minimum amount of energy ΔE that must be supplied in order to excite the fluid. Therefore, if ΔE is larger than the thermal energy of the lattice, given by kT, where k is Boltzmann’s constant and T is the temperature, the fluid will not be scattered by the lattice. The Cooper pair fluid is thus a superfluid, meaning it can flow without energy dissipation.

In a class of superconductors known as Type II superconductors, including all known high-temperature superconductors, an extremely small amount of resistivity appears at temperatures not too far below the nominal superconducting transition when an electrical current is applied in conjunction with a strong magnetic field, which may be caused by the electrical current. This is due to the motion of vortices in the electronic superfluid, which dissipates some of the energy carried by the current. If the current is sufficiently small, the vortices are stationary, and the resistivity vanishes. The resistance due to this effect is tiny compared with that of non-superconducting materials, but must be taken into account in sensitive experiments. However, as the temperature decreases far enough below the nominal superconducting transition, these vortices can become frozen into a disordered but stationary phase known as a "vortex glass". Below this vortex glass transition temperature, the resistance of the material becomes truly zero. 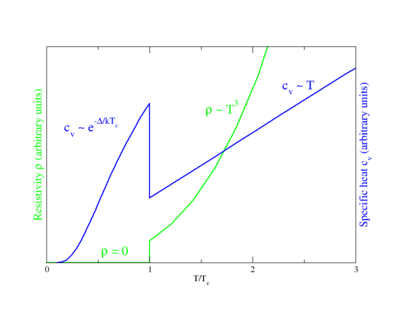 The onset of superconductivity is accompanied by abrupt changes in various physical properties, which is the hallmark of a phase transition. For example, the electronic heat capacity is proportional to the temperature in the normal (non-superconducting) regime. At the superconducting transition, it suffers a discontinuous jump and thereafter ceases to be linear. At low temperatures, it varies instead as e−α /T for some constant α. This exponential behavior is one of the pieces of evidence for the existence of the energy gap.

The order of the superconducting phase transition was long a matter of debate. Experiments indicate that the transition is second-order, meaning there is no latent heat. Calculations in the 1970s suggested that it may actually be weakly first-order due to the effect of long-range fluctuations in the electromagnetic field. Only recently it was shown theoretically with the help of a disorder field theory, in which the vortex lines of the superconductor play a major role, that the transition is of second order within the type II regime and of first order (i.e., latent heat) within the type I regime, and that the two regions are separated by a tricritical point.

The Meissner effect was explained by the brothers Fritz and Heinz London, who showed that the electromagnetic free energy in a superconductor is minimized provided

where H is the magnetic field and λ is the London penetration depth.

This equation, which is known as the London equation, predicts that the magnetic field in a superconductor decays exponentially from whatever value it possesses at the surface.

The Meissner effect breaks down when the applied magnetic field is too large. Superconductors can be divided into two classes according to how this breakdown occurs. In Type I superconductors, superconductivity is abruptly destroyed when the strength of the applied field rises above a critical value Hc. Depending on the geometry of the sample, one may obtain an intermediate state consisting of regions of normal material carrying a magnetic field mixed with regions of superconducting material containing no field. In Type II superconductors, raising the applied field past a critical value Hc1 leads to a mixed state in which an increasing amount of magnetic flux penetrates the material, but there remains no resistance to the flow of electrical current as long as the current is not too large. At a second critical field strength Hc2, superconductivity is destroyed. The mixed state is actually caused by vortices in the electronic superfluid, sometimes called fluxons because the flux carried by these vortices is quantized. Most pure elemental superconductors, except niobium, technetium, vanadium and carbon nanotubes, are Type I, while almost all impure and compound superconductors are Type II.

Superconducting magnets are some of the most powerful electromagnets known. They are used in maglev trains, MRI and NMR machines and the beam-steering magnets used in particle accelerators. They can also be used for magnetic separation, where weakly magnetic particles are extracted from a background of less or non-magnetic particles, as in the pigment industries.

Superconductors have also been used to make digital circuits (e.g. based on the Rapid Single Flux Quantum technology) and RF and microwave filters for mobile phone base stations.

Superconductors are used to build Josephson junctions which are the building blocks of SQUIDs (superconducting quantum interference devices), the most sensitive magnetometers known. Series of Josephson devices are used to define the SI volt. Depending on the particular mode of operation, a Josephson junction can be used as photon detector or as mixer. The large resistance change at the transition from the normal- to the superconducting state is used to build thermometers in cryogenic micro-calorimeter photon detectors.

Other early markets are arising where the relative efficiency, size and weight advantages of devices based on HTS outweigh the additional costs involved.

Promising future applications include high-performance transformers, power storage devices, electric power transmission, electric motors (e.g. for vehicle propulsion, as in vactrains or maglev trains), magnetic levitation devices, and Fault Current Limiters. However superconductivity is sensitive to moving magnetic fields so applications that use alternating current (e.g. transformers) will be more difficult to develop than those that rely upon direct current.