Over nine lakh candidates appeared for the All India Engineering/Architecture Entrance Examination (AIEEE) -2008 at 1,299 centres on Sunday.

Though some were expecting it, many complained about the tough physics section in the paper. Generally physics, chemistry and mathematics sections have 40 questions each, but this year there were 35. ( Total 105 Questions)

A new thing in Sunday’s paper is that a few questions, particularly in physics and chemistry are based on practical applications," director of a private coaching institute in Delhi, said, adding "it’s a good initiative on the part of the CBSE".

"The reasoning questions in the physics and mathematics sections were introduced for the first time in AIEEE exam. It wasn’t there last year. Physics was the toughest section, while chemistry was scoring. Maths was moderate as we were expecting a difficult section." said another student

Students were quite satisfied with the chemistry section and felt it was quite straight forward. Teachers were of the same opinion. "Any child could score the maximum in the chemistry section. More than class 12, questions were lifted more from the syllabus of class 11." said a chemistry teacher.

Students were expecting a tough mathematics section after the IIT JEE paper, in which maths was the most trickiest of them all. But the section that really took them by surprise was physics which generally is more scoring. "We were expecting physics to be easy, but that was not the case. The paper was analytical and required reasoning. Since there was negative marking I could not take a chance on questions I was not sure about." said another Student

Happy with the standard of questioning, coaching institutes felt that the trend will help test the reasoning and analytical capability of students, which CBSE was not doing in the previous years.

list of the rank you can expect on the marks you are expecting in AIEEE 2008. 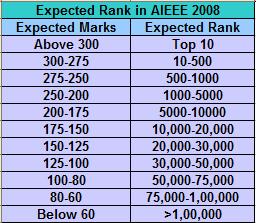 Actual AIEEE 2007 ranks according to marks obtained in AIEEE 2007: 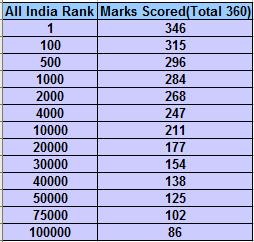 Dhirubhai Ambani Institute of Information and Communication Technology : Around 8,000-9,000 AIR.

LNM Institute of Information Technology - About 9-10,000